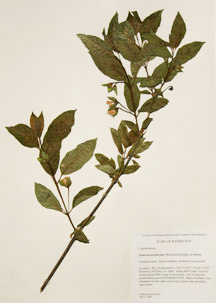 What is a Herbarium?

A herbarium (plural: herbaria) is a plant facility that functions in three ways: as a museum, a library, and a scientific lab.

Plants are collected in the field, and details are recorded such as ecology, form, size, and color. They are then pressed in newspaper, allowed to dry, and finally glued on thick paper. The preserved plants are stored in a cabinet, and organized. At the UW Bothell Herbarium, plants are organized alphabetically first by family, then by genus and species. The whole process takes at least 3 weeks, but the specimens can last hundreds of years.

Once plants are preserved, the herbarium holds them in their collection indefinitely. Similar to a library, a herbarium can borrow specimens from another facility so a scientist can use it during research.

Last of all, a herbarium functions as a lab for students and researchers. Students can use the specimens to help their plant identification skills and as an extension to classroom learning. Scientists can use the samples when studying taxonomy or even use the tissues from the plant for DNA and protein samples.

The herbarium practice formally began in the 16th century, and it was later streamlined by Carl Linnaeus in the 18th century by preserving specimens on paper and storing them in cabinets. The framework started by Linnaeus is used by modern herbaria, with a few added digital tools. To learn more read: History and Modern Uses of a Herbarium. 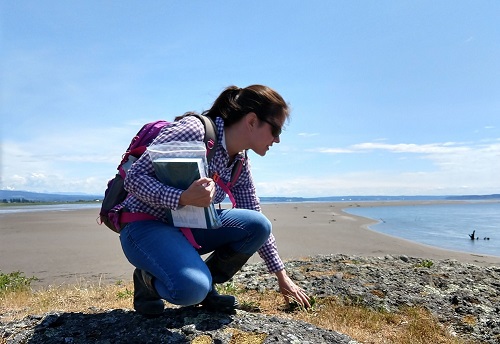 The UW Bothell Herbarium was founded by Tyson Kemper in 2008. For seven years, students and teachers would take tours and add a few pressed specimens to the collection. In 2014, Caren Crandell's Wetland Ecology class incorporated a pressed plant collection, and I fell in love!

In 2015, my goal for an undergraduate independent study was to learn how to preserve plants according to herbarium standards and revive the cabinet-effort. At the time, only 150 specimens had been collected. I met Ashley Shattuck another student that spring, and together we started collecting on a regular basis and haven't stopped. I asked permissions to continue volunteering after graduation, so in February 2016, I was hired to work 2 hours a week to maintain the collection (I joined the UW Office of Research full-time in June 2016).

Eve Rickenbaker at the Otis Douglas Hyde Herbarium in Seattle trained my in 2015 on how to collect and process specimens. In 2016 I received a donation of 30 cases of specimens from the greater Seattle area to add to the collection. Most of the specimens were collected in the 1980s and 1990s.

In 2017, the UW Burke Herbarium (WTU) in Seattle set me up so we could digitize the collection viewing it anytime online at the PNW Herbaria Consortium. I also started student volunteer programs with the Community Based Learning and Research group at UW Bothell. These students received hands-on tours and training, as well as helped me by gluing specimens.

In 2019, I launched herbarium digital badges. To keep track and also celebrate the contributions of volunteers, there are seven digital badges for volunteers for either their time contributed or for plant identification competency. Time badges are for 15 or 25+ hours and are awarded quarterly on the last day of the quarter. Competency badges can be tested for when the volunteer feels like they are ready and is usually scheduled with other volunteers testing for the same badge. These include ID on common Pacific Northwest plants.

Also, in 2019, the UW Bothell Herbarium was added to the Index Herbariorum, a world-wide index of herbaria.

In 2020, I launched the Plant Tags - Phone Tour. Students, trail users, and visitors can interact with nature on their own, without a guide, and still have access to high quality information by scanning plant tags along the school trail with their phone. This is great for students studying on their own and trying to complete ecology or plant assignments for class. Plant reports were written and edited by students, UW Bothell Herbarium volunteers, and

me. They include photographs, plant specs, how they can be used in restoration or benefit the environment and wildlife, and how the plant may have been used by local native tribes or used commercially.

In 2020, the herbarium funding has undergone some changes. I am no longer funded for a weekly contribution to the collection or to manage student volunteers. I still manage the collection as a volunteer and collect regularly with Ashley Shattuck and other community botanists. We currently have about 1200 specimens. Ashley and I focus on collecting plants from Snohomish and Skagit Counties in Western Washington and the Columbia Basin region in Eastern Washington.